WebVisable is the “Real Deal” after meeting and interviewing the Founder Richard Linden and discussing the benefits of good business and the disadvantages of similar company names in the market place. WebVisable Digital Marketing Solutions is Located in Costa Mesa, CA, right in the heart of Orange County.

Local Orange County based Tech Firm and Digital Marketing Solution Company WebVisable is among the fastest growing “Local SEO Companies” in years. Despite the striking similarities in the company name “WebVisable” to a Northern California company “WebVisible” with not the best of reputations, Founder Richard Linden and his team have successfully added clients with names we all know like Wahoo’s Tacos, Marriott Hotels, WakeUpNow, Ruby’s Diners, and have continued to grow over the last few years. 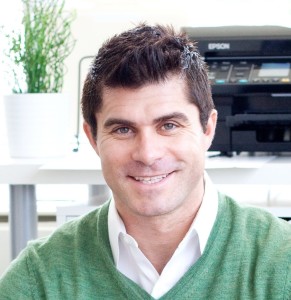 Against all odds and plagued by name similarities from a company that did not share his beliefs of honesty and integrity, Richard Linden and Webvisable are still mistaken for their unethical namesake WebVisible three (3) years after they were shut down by the Bank of Silicon Valley.  I had the opportunity to speak with WebVisable Founder Richard Linden, here’s what he had to say…

Richard Linden: “When I think about the name similarities between “us”, WebVisable, and “them” WebVisible” (who was shut down a few years back), only one thing comes to mind.”

Me: And what is that?

Richard Linden: “It’s simple, to preserve the integrity of our company (WebVisable) by never operating with unethical business and sales practices as they did.”

Me: Why do you feel that is such a critical component of success?

Richard Linden: Well, its companies like them that have given our entire industry a bad reputation; a reputation that we, among several other reputable companies in our industry are striving to change. That being said, I would be lying if I told you it’s been easy, in fact, it’s been quite the opposite, more of an uphill battle if you will.”

Me: Give me one example?

Richard Linden: “Lets see… here’s a good one that falls directly inline with the name similarities negative impact. The company up north (I believe they were in San Jose) was given a pretty poor online review by a customer of theirs that felt he had been scammed. This disgruntled customer had the best intentions in mind, however, he accidentally miss-spelled their name with an “A”, spelling it the way our company name is spelled, which ultimately reflected poorly upon us. I’ve been working to get this corrected for months. I even went as far as to write in to the well known review site practically begging them to correct a user miss-selling error that has caused us so much grief.“

Me: Have you ever considered changing your companies’ name?

Richard Linden: “I’ve thought about it a few times over the years, however, changing the name would be the equivalent of letting the critic win; the critic being the unethical company up north and the customer they upset. That’s not us, and it never will be! I’ve spent too many days in the arena fighting battles and working hard to build a reputable business that can create a positive financial impact for every client we work with. And when the dust settles, here we are, still here growing organically three (3) years later.”

Me: Well said, and I applaud your tenacity. Congrats on your recent growth and we here at TechNewsReports wish you and your team all the success with your current and future ventures.

Richard Linden: Thank you! And thank you for giving me the opportunity to speak out and set the record straight.  To all the readers, We are WebVisable Digital Marketing Experts, We are SEO Services Orange County, and we are exceptionally good at what we do. If you have any questions please don’t hesitate to give us a call at 855-639-8444, or, you are welcome to reach out to me personally via email at Richard@WebVisable.com

There you have it, separating the ”Good Guys” from the “Bad Guys”. And the team at WebVisable with an “A” are definitely the “Good Guys”, make no mistake. If your company is in the market for an excellent Digital Marketing Team that specializes in all types of SEO, White-Hat and Organic, do yourself and your business a favor and get Richard Linden and the WebVisable Team on your campaign.

Image of Original Published Article below 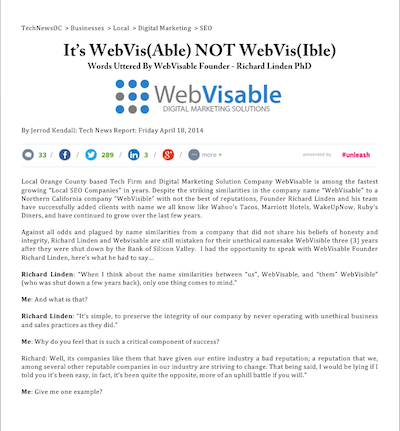